Kale is an unassuming leafy green that many people bypass due to its slightly bitter flavor. But if you learn to use it creatively, kale can be quite tasty, which is only one reason to eat this vegetable. In the realm of superfoods, and certainly of green leafy vegetables, kale is king (or close to it!).

Kale has a 3:1 carbohydrate-to-protein ratio – an exceptionally high amount of protein for any vegetable, and one reason why it has recently been acclaimed as the “new beef.”

Surprisingly, like meat, kale contains all nine essential amino acids needed to form the proteins within your body: histidine, isoleucine, leucine, lysine, methionine, phenylalanine, threonine, tryptophan, valine – plus, nine other non-essential ones for a total of 18.

Further, the amino acids in kale are easier to extract by your body compared to those in meat. When consuming a steak, for instance, your body has to expend great metabolic resources to break down the massive, highly complex, and intricately folded protein structures within mammalian flesh back down into their constituent amino acids.

Then, later, these extracted amino acids must be reassembled back into the same, highly complex, intricately folded and refolded human proteins from which your body is made. This is a time-consuming, energy-intensive process, with many metabolic waste products released in the process.

Kale, on the other hand, is easier for your body to use, yet can be considered “meaty” and worthy of being considered as a main course in any meal (you can try out the numerous kale recipes below).

If You Want to Flood Your Body with Antioxidants, Vitamins, and Minerals, You’ll Want to Eat Kale

Many people have difficulty consuming enough vitamins and minerals, but this becomes simple if you eat kale regularly. Most notably, one cup of kale contains over 10,000 IUs of vitamin A, most of which is delivered the form of natural beta-carotene, as well as significant amounts of vitamin K.

And as far as calcium is concerned, one cup of kale will give you 90 milligrams in a highly bioavailable form. One calcium bioavailability study found that calcium from kale was 25% better absorbed than calcium from milk.1

Kale is also an excellent source of magnesium, and as a cruciferous vegetablehas many of the same cancer-fighting properties as broccoli, cabbage, and Brussels sprouts. And, kale is loaded with both lutein and zeaxanthin at over 26 mg combined, per serving.

Of all the carotenoids, only zeaxanthin and lutein are found in your retina, which has the highest concentration of fatty acids of any tissue in your body. This is because your retina is a highly light- and oxygen-rich environment, and it needs a large supply of free radical scavengers to prevent oxidative damage there.

Your body concentrates zeaxanthin and lutein in your retina to perform this duty, and consuming these antioxidants may help to ward of eye problems like age-related macular degeneration. What else do you gain when you eat kale? 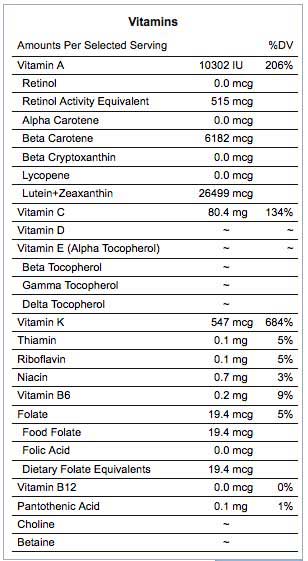 There are multiple varieties of kale, which descended from wild cabbage. The oldest variety is curly kale, which has ruffled leaves, a deep-green color and a bitter, pungent flavor. More “recent” varieties are ornamental kale, Russian, and dinosaur kale, the latter of which has blue-green leaves and a more delicate taste than curly kale.2 Ornamental kale, sometimes called salad savoy, was originally used as a decorative garden plant (it comes in green, white, and purple colors), although it can also be eaten and has a mellow flavor and tender texture.

When choosing kale, look for firm, fresh deeply colored leaves with hardy stems. Avoid leaves that are brown or yellow or that contain holes. Kale with smaller leaves tends to be more tender and milder than larger-leaved kale. Choose organic varieties (or grow your own) and store it in your refrigerator (unwashed) in a plastic storage bag (remove as much air as you can). Ideally, eat kale as soon as you can, because the longer it sits the more bitter the flavor becomes.3

If you avoid kale because of its bitter taste, you’ll be pleasantly surprised by the recipes that follow. Posted by Health.com,4 these recipes feature kale in fresh new ways that will tempt your taste buds and, with this much variety, there’s something for everyone.

Make it a goal to make your way through each recipe on this list… and remember to source locally grown organic produce, organic pastured eggs, raw dairy products, and grass-fed meats as much as possible. I also recommend swapping out olive oil for coconut oil in cases where the oil will be heated during cooking.